For the first time in 15 years, Rwanda successfully a one of a kind gorilla naming ceremony on 24th September during the world celebration of gorilla day.  24 baby gorillas born between June 2019 and September 2020 where given names in a virtual way by different prominent gorilla lovers, celebrities and conservationists from all over the world.

The virtual kwita izina replaced the traditional public gathering where thousands of travellers could travel from all parts of the world to gather at Kinigi Park headquarters of Volcanoes National Park for this annual celebration.

The reason for virtual gorilla naming in Rwanda was the ongoing covid19 pandemic which put restrictions to all public gatherings in Rwanda since March 2020 when the first positive case of coronavirus was registered in the country.  This years’ ceremony was Rwanda’s 16th kwita Iziina ceremony since 2005 when the first set of baby gorillas was given names. Unlike in the past when people would gather at the park headquarters, this years’ ceremony was watched live from the sitting room. The ceremony was live-streamed on all Rwanda local television channels, radios and the YouTube channel of Rwanda Development Board. Over 1000 people have so far viewed the virtual gorilla naming video, which is interesting. 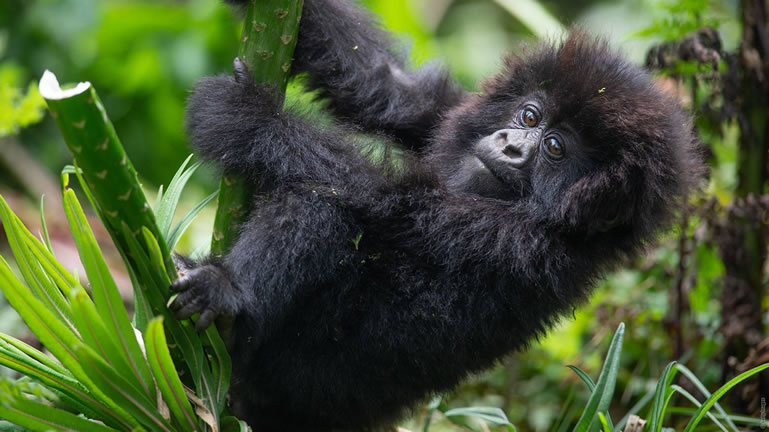 The experience entails giving new baby gorillas names for easy identification in their respective families. Gorilla naming ceremony is similar to the baptism ceremony in human homes where the newborn baby is given a name in the presence of parents, friends and relatives. Since 2005, over 300 baby gorillas have been given names.

The names given to the baby gorillas depend on the present situation, the condition in which the baby was born and the future hopes in the new baby. Most names are in Kinyarwanda local language for conservation purposes. This year, a few park rangers, Rwanda Development Board officials and conservationists gathered at Kinigi Park headquarters to celebrate the day while others while all other people were live streaming from their homes.

Interestingly this year, three key players in arsenal football club took part in the virtual naming of baby gorillas in Rwanda. Each player gave a name corresponding to his role in the football team. Pierre Emerick Aubameyang, Arsenals goalkeeper named his baby gorilla Igitego which means a goal in Kinyarwanda. Igitego was born on 5th July in 2019 in Mafunzo gorilla family.

The name “Igitego” was attributed to Rwanda’s gorilla conservation success overtime. In other words, Rwanda has achieved its goals of gorilla conservation, which make it one of the top gorilla safari destinations in the world. Hector Bellerin, the defender of Arsenal football club, named the other baby gorilla “Iriza”. Iriza is locally translated as first-born and was born on 11th October 2019 in Kwitonda gorilla family.  Bend Leno, the defender in the champions football club, named the other baby gorilla “Myugariro” locally meaning defender. Myugariro was born in Amahoro gorilla family. All these Arsenal players showed a great desire top trek these endangered gorillas one time when covid19 is defeated.  Some prominent who previously visited gorillas in Rwanda include Sir David Attenborough, Tony Adams, Naomi Campbell, Lauren, Natalie Portman and Alex Scott.

For over 25 years now, gorilla tourism has been Rwanda’s top tourist activity, which attracts the highest number of people from all over the world.  Rwanda is home to over 10 habituated gorilla families living in Volcanoes National park in northwestern Rwanda, and among these include Amahoro, Karisimbi, Umubano, Kwitonda, Hirwa, Susa A, Agashya, Sabyinyo, Ugenda, and Bwenge among others). These habituated gorilla families guarantee the availability of over 80 gorilla permits each day. In 2017, Rwanda Development Board doubled the cost of Rwanda gorilla permit from $750 to $1500 making Rwanda a luxury gorilla safari destination in Africa. Golden monkey trekking, chimpanzee trekking in Nyungwe Forest, big five games in Akagera National Park and Kigali city tour complement gorilla trekking in Rwanda. These together make a complete Rwanda safari package for a memorable adventure.

How to Book a Rwanda gorilla safari

Gorilla Journeys Limited is at your service to book and tailor-make a suitable Rwanda gorilla safari. Contact us today, tell us about your travel dates and we shall do the rest for you. Alternatively, you can book directly with Rwanda Development Board, the conservation body in Rwanda. Gorilla permit booking in Rwanda is recommended at least 6 months prior to the trekking date.

As we continue to celebrate the successful virtual gorilla naming in Rwanda, gorilla safaris to volcanoes National Park are now open at discounted rates.