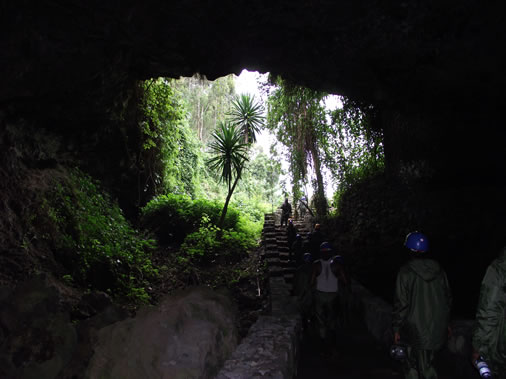 Because almost 80% of tourists visiting Rwanda are mainly attracted by the mountain gorillas of the Volcanoes National Park, visitors end up spending less than they expected because of fewer activities to enjoy (compared to the neighboring Uganda). It is for this reason that the Rwanda Development Board has developed new tourist products to supplement the tourists’ gorilla trekking experience.

Caves are one of the newly developed tourist attractions/sites in Rwanda. On top of their beautiful appearance, these sites offer shelter to a number of wildlife especially snakes and bats. Mugongo Caves are found within Mudende sector, close to Rosamond Carr’s properly, at few meters from the office of Mudende sector. These Caves are wonderful places for caving and camping, and when you visit the area, you will find campsites close to the Caves.

Just like most Caves in Rwanda, the Mugongo Caves were formed from Cenozoic volcanic rock, in several million years ago. These Caves are also part of the Busasamana Cave system and are one of the most attractive in the area due to their day-trippers. Not only that, they are easily accessible because they are found at just a stone’s throw away from the former Adventist University in Mudende. Mugongo Caves are found at a stone’s throw away from Mrs. Rosamond Carr’s property, approximately 200 meters from Mudende sector Head Office.

In 1949, Rosamond Carr was reportedly the first American Citizen to live in Rwanda and owned a flower farm/garden. She was a friend to Dian Fossey, the American primatologist/zoologist who dedicated over 18 years of her life to conserve the critically endangered mountain gorillas and also had the chance to witness the country’s independence but unfortunately left during the bloody 1994 Rwandan genocide.

She later returned after the genocide and turned her farm into an orphanage and named its Imbabazi (meaning hope) of Mudende to offer home and take care of the orphans as well as displaced children from the genocide.I

f you planning a safari to Rwanda, add the Mugongo Caves and the nearby Imbabazi Orphanage to your itinerary so that you can get a chance to spend some time and interact with the children as your hear their painful stories and also donate (willingly) to put smiles on their faces.

In addition to Mugongo Caves, Rwanda is a home to many other Caves across the country that include Mudende, Kabari, Busasamana Cave (the 1-kilometer long Cave that links to several Cave systems in Kanzenze), Bweza, Kanzenze and Musanze Caves (close to Volcanoes National Park) among others.