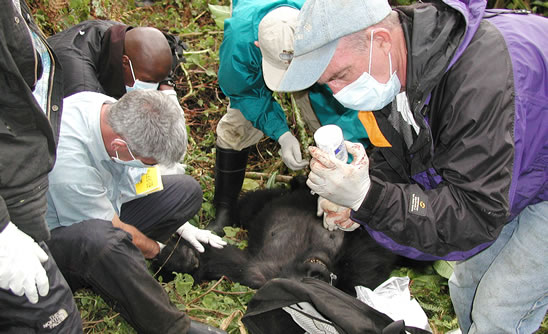 Gorilla doctors is a group of veterinary doctors dedicated to saving both the mountain and eastern lowland gorillas found in Rwanda, Uganda and the Democratic Republic of Congo. This team of doctors offers first hand medical treatment to the ill and injured gorillas. with only 880 mountain gorillas left in the world and the ever decreasing number of Grauer’s gorillas in Congo , the well being of each and every individual gorilla is important to the existence and survival of the gorilla species. This is why the gorilla doctors work so hard regularly monitoring the health of the gorillas and also try to treat the ill and injured gorillas and also rescue and help the orphaned gorillas of which their families were distorted by the poachers and also the ongoing civil war in the DR.Congo.

Dian Fossey was the first gorilla doctor. This lady first conducted her veterinary medicine on the gorillas in 1940s. By the mid 1980s, she found through her research at the Kisaroke research center that the mountain gorillas population was drastically decreasing with less than 300 known gorillas were remaining by that time in the world. The major causes of the extinction were the gorillas were being killed by the poachers, life threatening injuries caused by snares and also diseases that were not treated at all.

Dian thought that the diseases were being transmitted by the humans who lived around the gorillas and unfortunately at that time there was no health project to treat the sick and injured gorillas. as years went by there are some other vet doctors who came along to help these gorilla to survive and in the process an organization was formed the Gorilla Doctors. Some of them included;

Dr. Jan Ramer
she worked as the regional veterinary manger from 2013 – 2015 and 2009 – 2011. She headed various health interventions, supervised the treatment of 8 new gorilla orphans, and facilitated the move of 9 gorilla orphans from Rwanda to DRC. Dr. Ramer returned to the US in January 2015 and where she works as the Director of Conservation Medicine at the Wilds in Ohio. Oversee

DR. Zimmerman
Dr. Zimmerman managed Gorilla Doctors’ Africa projects on regional base in Musanze, Rwanda from November 2011 to December 2013. During her term, she made countless medical interventions and supervised the medical care of 3 rescued orphans: Grauer’s gorillas Baraka and Isanti, and mountain gorilla Maharishi.

Dr. David Gardener
From 2006 to 2007, Dr. Gardner worked as Gorilla Doctors’ regional field veterinarian, responding to emergency cases in all three countries, training other staff members, and organizing the Gorilla Conservation Employee Health Program. Now based in based in South Lanarkshire in Scotland, Dr. David works as a partner at the ARMAC Veterinary Group.

Dr. Felicia Nutter
From 2002 to 2006 Dr. Nutter served as a regional field veterinarian responsible the project’s regional management. She oversaw the domestic animal health and research programs, co-founded the orphan care program with Dr. Whittier, and helped start the employee health program. Currently, she is the Senior Technical Officer for the USAID RESPOND Project and a research professor at Tuft’s Veterinary School.

Dr. Innocent Rwego
Dr. Rwego worked as a regional field veterinarian amid 2001 and 2005.he apparently serves as a technical advisor for the East Congo Basin USAID RESPOND project and is a lecturer in the Department of Biological Sciences, Makerere University at School of Public Health and also at University of Minnesota at College of Veterinary Medicine. He is now based in Kampala Uganda.