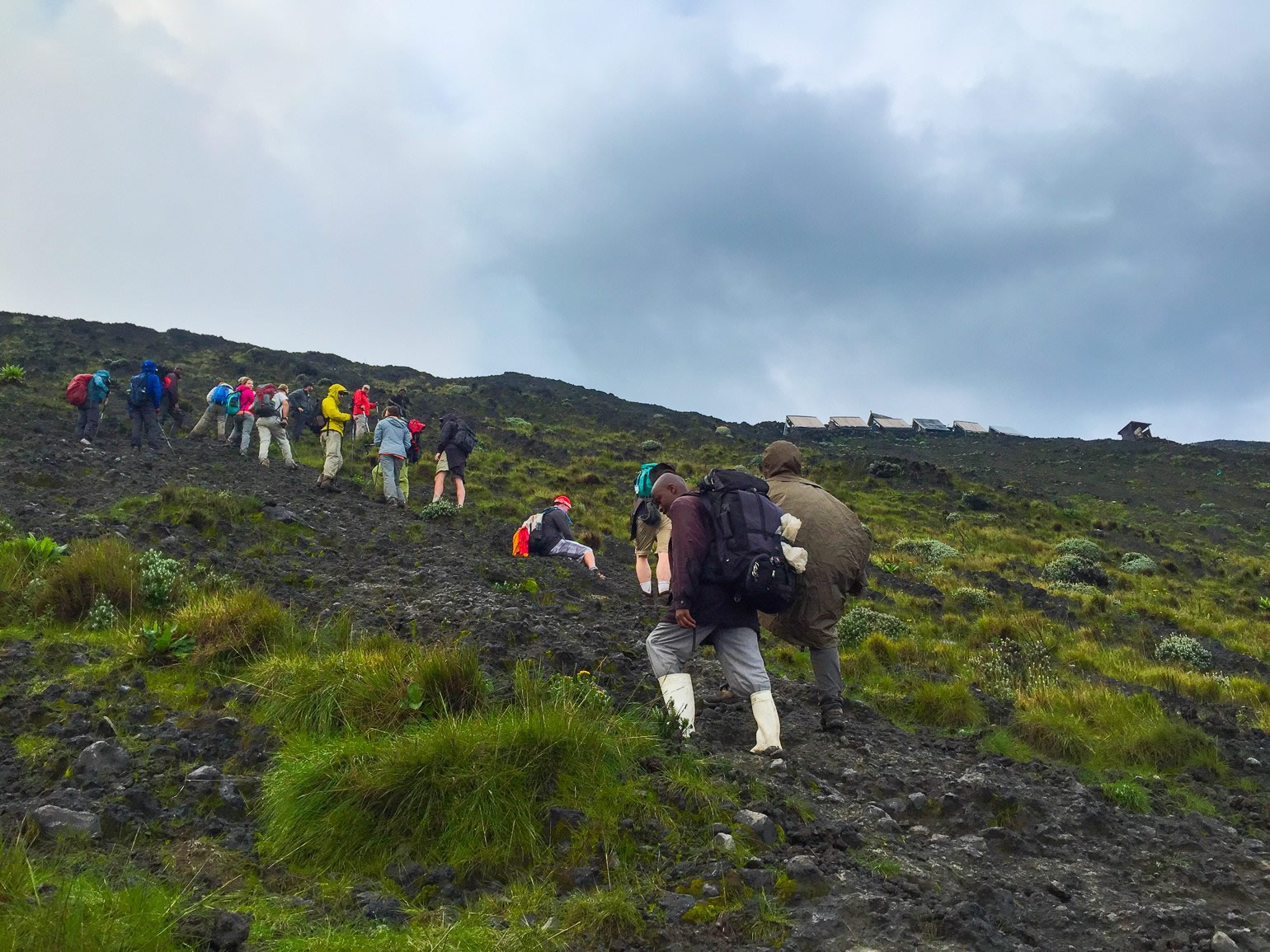 Democratic Republic of Congo (DRC) is one of the biggest countries in Africa and it comes with large chunks of land, incredible biodiversity and untapped mineral resources which are hidden under its unique mountains and forests. DR Congo is truly hidden treasure in Africa, offering variety of wildlife including the rare mountain gorillas that thrive in the Virunga National Park just at the border with Uganda and Rwanda.

The park was founded around 1925 making it the oldest protected area in Africa and given conservation efforts; it has kept on thriving despite the insecurities in the country. The offers refuge to numerous wildlife, landscape and plant species as well as the most spectacular Nyiragongo Mountain. About 200 mountain gorillas call this park their home and there are 8 groups that have been habituated for visitors to track each day.

This UNESCO World Heritage Site covers an area of 7800 square kilometers and consists of 3 areas each of which comes with its own distinct landscape and wildlife. Around the northern side, comes the Rwenzori Mountain ranges that stretch up to 1600 feet and features a permanent snow capped summit. The park also refuges the endangered Okapi which look like giraffe but with distinct zebra striped legs. These unique species wander around the valleys of Semuliki River. Virunga National Park also lies around Lake Edward and the Virunga’s middle area offers refuge to most of birdlife, elephants, fish, buffaloes, warthogs, lions, hippos and topi. The Southern part features Lake Kivu and other famous centers. In this sector, it is possible for one to view volcanoes, chimpanzees and several habituated mountain gorilla families.

If you are adventure enthusiasts, consider Mount Nyiragongo one of the must to visit volcanoes in your bucket list. This stratovolcano offers breathtaking hiking adventures which come along with the splendid views of its surrounding mountains and forests. On the top of this mountain, you will be amazed by its bubbling Lava which can be spotted at even a distance while producing the smoke. Nyiragongo Mountain features also features the biggest Crater Lake on its summit and hikers get thrilled by its views.

Tchegera Island is a small Island that comes in a horseshoe shape and much as it may not feature as the leading tourist attraction in Virunga National Park like most forested hills, the island is strategically located in Lake Kivu and makes it the excellent spot for one to get out of the noisy Lake side towns of Bukavu and Goma. If you are interested in exploring more about Virungas, Tchegera is the perfect place that you have to consider. The Island comes with the most outstanding views of its surrounding water and further Lakeshores and during a clear night, you will catch the views of the smoky Mount Nyiragongo as its Lava bubbles out. You will spend a night in most of the Island’s scattered safari tents which offer a welcome shade from midday sun and privacy when it is time for bed. The tents are positioned in such a way that you can spot out some of the wildlife around the island especially butterflies and birds like the herons, gulls, eagles and cormorants.

Goma and Bukavu are the biggest towns in the DR Congo and they are situated on Lake Kivu shoreline. Over 2million people live within these cities. Goma is situated in the north after you have crossed the borderline fro Rwanda’s Gisenyi and a short distance from the Virunga National Park’s edge. Nyiragongo Mountain is the nearest volcano that is popular for its current eruptions of 2002 which destroyed about 15 percent of the city. Due to the effect, the residents from Goma town started constructing on the hardened Lava flow, using the volcanic rock as the foundations for their houses, shops and different other structures and today the architectural looks around this town are fascinating making this town an incredible destination of its own. In the southern side of Lake Kivu, the Bukavu city comprises of 5 irregular fingers of land and they extend to the bay making it the best spot for excursionists to achieve their dreams. It is also located adjacent to the Kahuzi Biega National Park which features the popular and rare Eastern Lowland gorillas and for primate lovers; this is the perfect site not to miss out in your bucket list this holiday.

Virunga National Park’s headquarters is highly fortified and provides 3 distinct primate species. Around the Senkwekwe center, staff members take care and support the orphaned mountain gorillas in the natural habitat and this is the only facility on earth. The center was opened around 2009 and has supported several primates whose parents were killed by poachers, animal traffickers and wire snares. In their forested enclosure, the orphans are looked after by devoted care takers who play with them, feed them on healthy diet and observe their health and any behavioral changes. They get expert veterinary attention from gorilla doctors. Besides staff members also assist to rehabilitate the eastern lowland gorillas. Whereas they are not permanent residents in this area, they are transferred to the Gorilla Rehabilitation and Conservation Education Center (GRACE) west of the Virunga, a facility that has been set to take care of this sub species in particular. Some chimpanzees are also found within Rumangabo after they were cut off the flow lava around Mount Nyamulagira. Efforts have been put to ensure that the chimpanzees get used to humans.

Therefore, DR Congo is not just famous for its larger size but also for its unique tourist attractions that offer visitors with lifetime experiences.