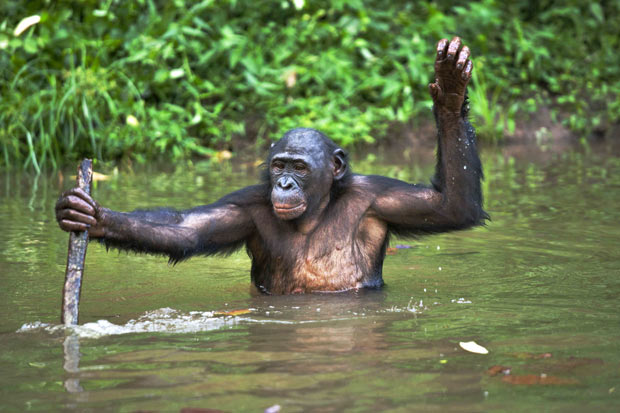 Scientifically known as Pan Paniscus, the Bonobos have also been referred as the pygmy chimpanzees and less often the dwarf or gracile chimpanzees. They are endangered primates and belong to one of the two species that make up the genus ‘Pan,’ the other is Pan Troglodytes or rather the usual chimpanzees. Many times, the two have interchangeably been confused but they feature some differences.

Firstly, the Bonobos can be differentiated by their relatively long legs, pink lips, dark face and tail tuft via adulthood and parted long hair on its head. They thrive within 500000 square kilometers’ area of the Congo Basin in the Democratic Republic of Congo-Central Africa. They are omnivorous and they thrive within the primary and secondary forests plus the seasonally inundated swamp forests.

The Bonobos and chimpanzees feature among our closest relatives. The bonobos share DNA of about 98.7 percent with humans. Given the fact that the two primate species are not that efficient when it comes to swimming, creation of the Congo River about 1.5 to 2 million years ago, led to the speciation of the Bonobos. They thrive in southern side of the River and they were divided from the ancestors of the usual chimpanzees that thrive in northern side of the River. While there is not real data on their number, they estimated to range from 29500 to 50000 members. They are also listed under IUCN Red List as endangered species and most threatened by habitat loss and human population growth and movement as well as the poaching which has become the leading factor rendering to reduction in their number. They take about 40 years while in captivity.

The Bonobos are usually regarded to be more gracile compared to the usual chimpanzees. Whereas the male chimpanzees can overtake any Bonobo in size and weight, the two primates largely overlap in body size. The adult female Bonobos are smaller than adult males. The males weigh from 34 to 60 kilograms compared to 30 kilograms for females. The total length of Bonobos ranges from 70 to 83 cm. When adult Bonobos and chimpanzees stand straight, they can stretch up to 115 cm. The Bonobos’s head is smaller compared to the usual chimpanzees with less prominent brow ridges above the eyes.

The Bonobos have black face with pink lips, small ears, wide ears, wide nostrils and long hair on its head that makes a parting. Females have a bit of prominent breasts unlike the flat breasts of other female primates but not very prominent compared to the ones of humans. The Bonobos have a slim upper body, narrow shoulders, long legs and thin neck.

The Bonobos are both arboreal and terrestrial. Most ground locomotion is featured by quadrupedal knuckle walking. The bipedal walking has been recorded as less than one percent of terrestrial locomotion in the wild but this has been reduced due to habituation and while in captivity there is more variation. The bipedal walking in captivity as a percentage of bipedal plus quadrupedal locomotion bouts has been seen from 3.9 percentage for spontaneous bouts to around 19 percentage when much food is offered. These physical traits and its posture offer the Bonobo an appearance more closely the same to that of the humans compared to the chimpanzees.

The Bonobos have a highly individuated facial characteristics as humans do, such that one member may look distinct from one another, a trait adapted for facial recognition in social interaction. For Bonobos, sex is used for almost everything including avoiding problems, showing love, reducing stress, solidifying social status and many more. For chimpanzees’ communities, the alpha male is the only one allowed to mate with other females and for Bonobos cultures, each one has sexual freedom and sex acts take place between all combinations of ages and genders. Bonobos usually have homosexual acts and this is common among females and they use as a way of creating strong emotional bonds and keeping social dominance over males.

Bonobos also have higher pitched voices unlike the chimpanzees that use tools to hoot, scream and grunt. The other difference is that chimpanzees are famous for using tools to crack nuts, collect ants and clip leaves and this is rare with Bonobos that use tools only in captivity.

With the above discussion therefore, Bonobos are among the very few unique primates that are worth interacting with while on safari in the Democratic Republic of Congo. With the above differences, we believe that you will be able to distinguish between the Bonobos and the chimpanzees as most people tend to confuse the two.